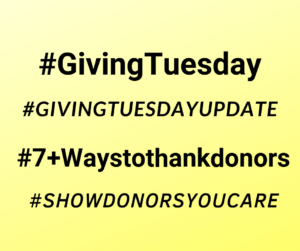 On #GivingTuesday I received 20+ solicitations.

On Wednesday, the following day, I received only 2 #GivingTuesday updates.

Only 2 organizations thought I would care about the results?

Here is a list of excuses I have heard from friends, clients, colleagues, and nonprofits around the world as to why they did not send an email letting donors know how much they raised from something like #GivingTuesday or an event:

While I admit that I do notice details like follow up because of professional curiosity, I also take note because it shows me which organizations understand development is not just fundraising.

If you want to learn how Mersky, Jaffe & Associates can improve your development plan and stewardship ideas, email me

Maybe I can start a #GivingTuesdayUpdate as a trend for next year.

Want to read more about #GivingTuesday Results? The Chronicle of Philanthropy has a great article about the amounts raised. 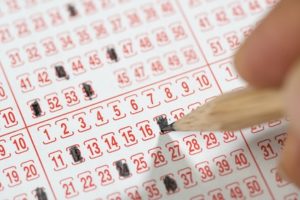 My brother-in-law has said that a lottery ticket is really a stupidity tax. While I know that logically he is right, I buy them from time to time.  Usually, it is when I am in a store that sells lottery tickets and it is over $100 million.  That turns out to be approximately 5 times a year. Yes, I will pay the $10 stupidity tax in exchange for the possibility, hope and fun with which it comes.

This is not the only $10 that I will basically throw away this year. Other times will include:

Then, there are my donations. It is kind of like the lottery – I am giving someone money and getting possibility and hope in return. Sometimes I think it is fun, depending on the nonprofit.

How can you help prospects see that giving to charity = hope, possibility and fun?

One way is to use a social media campaign to offer them the lottery dream of hope and possibility. If they match what they have or would have spent on lottery tickets (a $2 donation is still a small initial gift – but it is still an initial gift). Offer them pictures of the possibilities their “lottery ticket” will provide. And tell them why it feels like winning the lottery for your beneficiaries.

And they will have health benefits too!

As I have referenced before, giving has physical benefits for the donor.  You can explain to every prospect that their gift has the potential to improve their own sleep, digestion, memory, learning, appetite, motivation AND counteract the effects of stress hormones. Yes, you can give them access to 3 naturally-created, feel-good hormones (aka Dopamine, serotonin, and oxytocin) for just $25.

Ok, that is more than a lottery ticket. But it is less than an inflatable at skee ball. 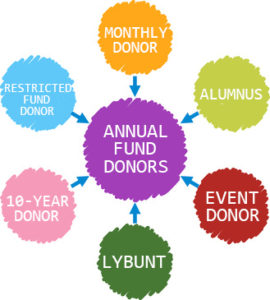 Solicitation strategies start with assessing the current situation. Do you treat all your prospects and donors the same? Should you?

Now, more than ever, you should have a development plan for all prospects and a stewardship plan for all donors.

But, you should not plan on having the executive director “meet” with every donor. How can a nonprofit engage each prospect and donor when there are thousands? Annual fund segmentation.

Start annual fund segmentation by considering how they give.

Additional key points to keep in mind include:

Each organization will have its own set of segmentations.

And contrary to popular belief, segmentation was not created to give you more work.  Instead, it gives you more directed work. And a path to raising more money (which is the point, isn’t it?)

It may seem easier to send the same fundraising letter to the 1000+ people on your mailing list and move on.  But what are you moving on to? If you rely on your annual fund to support your organization, this must be a priority for your development team. Even if it is a team of one.

While the competition for #GivingTuesday gifts is fierce, there are a lot of people who decide to give their gifts on that day–especially if they want to promote their giving on social media channels.

Your job is to make giving as easy as possible, and then, follow up in a way that shows your nonprofit is a good investment. Here are a few follow up steps to consider incorporating into your next couple of weeks.

And when #GivingTuesday is over?  Consider incorporating these ideas into your fundraising plan.  The more donors feel appreciated, the more likely they are to give again in the future.

For those of you who read my articles each week, you will know that last week, in the Part 1 of this article, I talked about what I learned at a seminar on fundraising using social media.

We did an exercise examining the age demographics of donors and what type of social media we thought they would be accessing. I translated that to mean – meet the donors where they are. A sound strategy on- or off-line.

And then, the secret to successful fundraising on social media, occurred to me. The rules don’t change just because the medium does. So here are my tips:

I know this second article is also longer than I would like, but I did promise to explain the “digital split of 1993” which I referenced last week. (It is probably more of an early 90s digital split but it doesn’t sound nearly as enticing.)

The idea of the digital split of 1993 has no proof, just a simple observation that my husband and I have seen among our friends, relatives and colleagues. Sometime during the early 90s, college students changed from using electric typewriters (some which stored the paper we were writing on tiny disks!) to using computers for each and every paper. Email became an accepted and expected form of communication around the same time. It is the difference between people who see technology as something to learn vs. something that is a part of who they are.

Of course this is a gross generalization. I like technology, but I will never have the same relationship with it that people, just a few years younger do. I suspect my kids will one day reference the divide as pre-social media and post-, but I will let them write that in their own newsletters (or social media outlets) years from now.

This week I attended a Synagogue Council/Jvillage Meet up (read: workshop) focused on fundraising using social media. I want to stay current when it comes to how nonprofits can expand their reach – in this case – the use of Facebook, Pinterest, Twitter and the like. Obviously, I am not alone – it was well attended– so I thought I would share what I learned during the overview of fundraising and the social media focus of JVillage’s presentation.

What I knew before I went:

What does this all mean? I think the rule of one hour, once a week to schedule your social media for the week is doable for most nonprofits and will keep you current enough to encourage followers. I also think you should get everyone on your team thinking about this and thinking of ways to excite your audience.

Did you notice the major concept missing from what I learned? It is the idea of how to improve fundraising. There was some talk about which platforms your constituents are using and why your nonprofit will NOT be the next water bucket challenge but very little on how to use it to fundraise. As this article is already too long for a quick read which is what I try to provide every week, I have decided to continue it next week with my own thoughts on the subject.

Want to read some of our other articles on similar topics? Here are a couple from the past year:

Should You Be Following Fundraising Trends?