The first question I would have is, do you want to save the relationship? How much time and energy are you spending on this person? And, what else could you be doing to replace the departing board member’s donation?

If they answer is that you still value what they offer, be prepared to put in work and be creative.

Full disclosure: over time their funding may shift as they become involved in another organization that looks good on LinkedIn. Sorry if that is too cynical but we all know those board members.

Does losing a board member mean losing their donation? There can be any number of ways to retain the relationship, but they all boil down to one point: Keep them engaged.

If it is time to strengthen your board, email me to talk about how MJA can help. 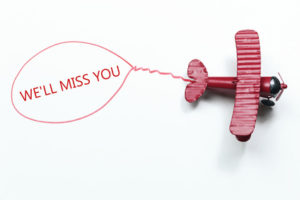 A close friend, Alex, told me an all-too-common, disheartening story about a nonprofit board she left a few years ago.

She was a founding member of a small nonprofit’s board of directors. She was an active volunteer, and one of their major donors, for two terms before deciding it was time to step down.  She mentioned her intentions to the president of the board, and he asked her if she would stay on. She agreed to one more term, helping to plan dinners for 3 fellow board members who stepped off during that time.

When her term was up, with her last meeting on the horizon, there was no talk of a dinner. In fact, there was not even an acknowledgement at the meeting for her service to the organization.  She awkwardly walked out wondering if the door was going to hit her on the way out.

This was no way to say goodbye to a board member.

December rolled around, and she began to wonder whether she should continue to donate. She helped found, build and strengthen this nonprofit. She had been invested in the mission, vision and values. But she felt ignored and underappreciated.

If you were in her shoes, what would you do?

Now flip that thinking, and consider, what you can do to prevent this situation with your board members.

What happened to Alex and her donations? The first year that she stopped giving to the organization she felt guilty. But, then, she reminded herself that she is not a priority to them. If she was, she would still be giving.  Now, she is just one more statistic contributing to that organization’s low donor retention rates. And she is happily involved in two other nonprofit organizations.

Want to read more about Board Members Relationships with your nonprofit?

Attention Board Members: 2 of 3 W’s Is Not Enough