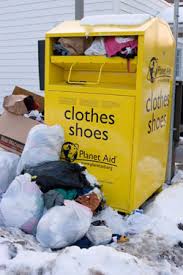 How does someone know if they are donating to a worthy nonprofit? Few of us who are donating to a variety of organizations take the time to do research or check out the watchdogs like CharityWatch or Charity Navigator.

Recently, Planet Aid came under scrutiny by Charity Watch for claiming the expenses it incurred during clothing and goods collections are program expenses and not fundraising costs (personally I side with CharityWatch). There were also questions about whether they were promoting a “cult-like” atmosphere for workers.

A quick Google Search shows that there have been questions about the nonprofit for years. Yet the bins keep getting donations because unless you were looking for it, donors had no idea. And, until a worker in Maryland spoke with an ABC affiliate in the video, Behind the Bins: Former Planet Aid Employees Describe ‘Cult-like’ Experience, Planet Aid was not called out on a national scale for its questionable practices.

You may know a bit more about your church or synagogue where you have been a Trustee or a family services agency in which your best friend has long been involved, but where do you donate your used clothes or books? What about the places you send your checks each December? How much do you know about each nonprofit?

The truth is that most nonprofits are innocent. And, by innocent I mean not intending to spend excessively and trying to do the right thing. But every time I hear of a new nonprofit I wonder whether their efforts wouldn’t be better spent helping existing organizations reduce expenses and increase fundraising. Of course, I do have a bias that many nonprofits overlap in intention and services, which leads to inefficiencies and competition for dollars (I wrote an article about this in the early days of this blog which you can read by clicking here).

Going back to the original concept of transparency, it should not surprise a nonprofit if some of your donors want to know the percentage spent on overhead – including fundraising. They do not want to be jerks (well most don’t want to be), instead, they understand that without a level of accountability, it is easy to stray onto a path that has good intentions but with results that are not ideal.

Planet Aid may or may not have intentionally deceived donors. The courts will have to decide, but if they truly believed that they were saving the planet by collecting clothing, their hearts might have been in the right place. Then again, it seems like their donations in Africa were also questionable, but I will also leave that for others to critique. And in the meantime, I will do a little more research on the organizations to which I donate.