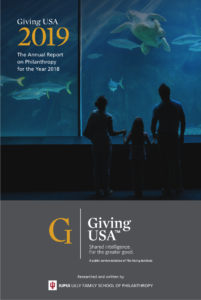 Nonprofits, and nonprofit consultants, have learned to value the annual release of the 2018 Giving USA Report. It has 470 pages of interesting facts and figures. And if you know what to do with them, and how to benchmark yourself against them (more on that later), they can be very useful tools. If you only look to see that giving has grown for environmental and animal nonprofits but dropped for religious giving, you are getting caught in the hype.

Here are key takeaways from the 2018 Giving USA Report and how they can impact your organization’s donations for 2019: