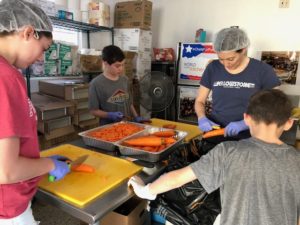 My husband and I took our three children (ages 14, 12 and 9) to Puerto Rico during April school vacation to volunteer and help in disaster relief.  Coordinating the trip on our own, we booked flights and a hotel, hoping that the rest would fall into place.

When we initially looked for volunteer opportunities, we were surprised at how challenging it was. We were also told that the best thing we could do was go to Puerto Rico and be a tourist.  As much fun as that sounded, it was not what we were looking to do.  We really wanted this trip to be about giving back.  After much research and lots of emails with local organizations, we ended up with plans for four days of volunteering.

After we arrived in Puerto Rico, we spent the first day at the Food Bank of Puerto Rico in Bayamon where we bagged food, which would later be delivered to the community. Here we worked with local community members that ranged in age from 10 to adult and filled over 200 bags that included pasta, pasta sauce, Ensure as well as canned; carrots, sausages, and potatoes.

On our second day in PR, we volunteered for World Central Kitchen (WCK) a wonderful organization started by chef José Andrés. Since the storm, WCK has served more meals than the U.S. government. We cut, prepped and cooked food for hours alongside volunteer and paid chefs, despite the entire island losing power a few hours into our work. No one blinked an eye, we just kept going. 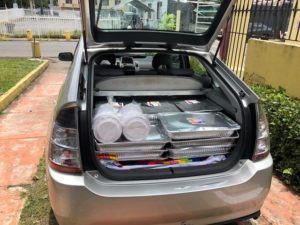 While there, we were offered the opportunity to join a dedicated community organizer named Lola to deliver the food we had just cooked.  With the power still out and no GPS, we followed our liaison, Griselle (Ñaña), to Lola’s house. When we arrived, Ñaña explained we were heading into some “rough” neighborhoods and put a sticker on our car to identify us as part of WCK. She explained that Lola would take us to the places she knew the food was needed and we would follow them and serve it out of the back of the hatchback. When we asked her if where we were going was “safe,” she replied that most people knew and respected Lola, but there were a few places we should not get out and to follow her lead.

At this moment, my husband and I looked at each other with a bit of fear in our eyes. We were going to be following Ñaña’s car in our bright blue Jeep rental car, without any way to know where we were if we got lost. We thought about turning back. Then we realized that this is where the rubber met the road.

That next hour was by far the most impactful of our trip. We weaved through some of the poorest neighborhoods we’d ever seen, even before the devastating effects of the storm. Most of the houses still standing had blue tarps for roofs and were open to the elements; power lines were down everywhere. When we asked Lola what the biggest current need was, she said mattresses – they all got wet during the hurricane. (My husband, Bobby, is now working with one of his clients to coordinate the donation of mattresses).

Coincidently, there was a reporter from Esquire magazine at WCK that day. (You can read the article here – she did a phenomenal job explaining our day and what we encountered.. 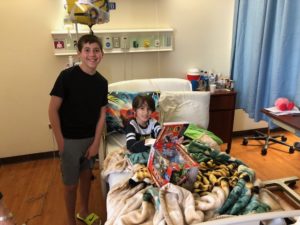 Our third and fourth days, we shifted our attention and visited hospitals with significant number of children. First, we went to the Puerto Rico Children’s Hospital, a public hospital in Bayamon. Our 12-year-old son, Max, had created an online fundraiser and collected toys and cash.  We brought three large duffel bags of toys with us from Boston. We went from room to room, hoping to brighten the day of these children by giving them a small gift.  At first my children were hesitant to go into the patients’ rooms, but once they saw the reaction they quickly saw that the language barrier really didn’t matter.  My kids became increasingly excited to deliver the next gift.

While the toys brought smiles, we could see there was so much more to be done.  When we asked the staff, they mentioned their need for diapers and water.  Our day ended with a trip to Wal-Mart to fill the car with these supplies before we headed back to the hospital.

On the last day, we visited San Jorge Children’s Hospital, a private hospital in San Juan.  We delivered gifts to the children on the Oncology floor as well as in the Intensive Care Unit.

We learned that the very things that we, as well as the citizens of Puerto Rico, take for granted—fully stocked grocery stores, easy access to markets, and doing our own shopping for what we wanted—was not a possibility anymore due to the devastation of the storm.

Each day, was both rewarding and heartbreaking for different reasons. While there will still be times we choose to be tourists, we will always remember this vacation to volunteer, and hold it close to our hearts. I think we all came away with a valuable lesson about resilience and our responsibility to make a difference.