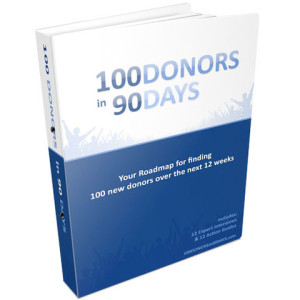 I just finished listening to week 9 of 100 Donors in 90 Days.  This week, was a conversation with Pamela Grow of Simple Development Systems.  While she provided tips on success with donor surveys, monthly giving programs, testimonials and grant writing, I want to highlight her Pass It On Packet.

Pamela’s focus is often on small shops because that is where she got her start.  And while she has been in the business for quite some time, her “packets” were created at her first development job once she moved on from grant writing.

As Pamela tells the story, she was hired into a small nonprofit where it seemed as if the previous development director spent years coasting on the tails of a large capital campaign.  Many donors from the campaign were no longer engaged or even contacted on a regular basis.   An all too familiar story for those in the nonprofit world.  Her solution?

She surveyed a select group of 20 donors to learn more about their interests and to guide her way.  Eighteen responded, five with unsolicited gifts.  Each of the five gifts, as well as any other gifts that came in that year went home with a thank you note and two to three “Pass It On Packets.”  These packets (a combination of appeal brochure and press kits) were offered with a note explaining the following situation.

With the need for funding higher than ever and a lack of money for fundraising outreach, they had decided to ask friends and donors of the organization to help spread the word by giving these packets to people who might have similar interests in helping this health services organization.

And people passed it along.

Ever since, she has been advocating for this simple method of spreading the word about the organization.  It is an easy way for people to invite their friends to join their cause without any pressure.  Their friends can read it, toss it or donate to it.  And it turns out – a decent percentage of people donate.

While it takes a little work and financial support to put together the packets, it does not involve staff to find the new prospects.  Your current donors can do that work for you.  And the more advocates for the organization – the stronger you will be.

To read other pieces in this series, 100 Donors in 90 Days, click here