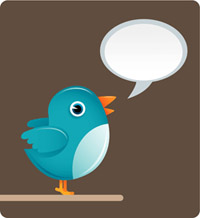 Twittering is like hugging. Just because it’s hard to measure the return on investment doesn’t mean there isn’t value there. – Retweet from Tony Hsieh of Zappos

Twitter is, simply put, another way to keep in touch with the people who are interested in your organization.  The 140 characters may seem limiting at first, but twitters are efficient for both parties.  Here are 10 creative ways in which others are using twitter and other social media outlets for effective two-way communication–offering information while collecting contact data. The twitter username is available when appropriate.

At the end of the list, I have collected the golden nuggets we can gather from these examples and the organizations that have employed them.

What have I learned from this collection of organizations and there use of Twitter?
First, this is just the tip of the iceberg.  There is so much content being generated everyday; people do find creative ways to use any new technology.

Secondly – the value to a nonprofit is to have a group of people who are interested in your cause who have opted-in to hear from you.  Collect followers, and then decide whether you will use it to generate excitement, poll the supporters or provide timely updates on a project.

Thirdly, it will be an essential part of any organization’s marketing plan for years to come – more and more people are joining twitter and various social organizations everyday.  Right now, it may seem as if it is only a way to reach the young, the technologically savvy and the marketing specialists – but those groups can be incredibly impactful in their outreach for themselves, and potentially, your organization.