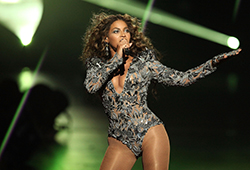 This past weekend Super Bowl Sunday came and went with the usual conversation about the MVPs, the ads and my daughters’ favorite part – the halftime show. We, like many millions of viewers, watched the musical interlude, singing along with a couple of Coldplay songs, a Bruno Mars favorite with a brief mix of a Beyoncé reference and a song that we had never heard of and couldn’t quite hear. I did notice the difference between the sunny, flowery Coldplay and the urban feel of the other two singers but whether it was my TV’s sound or the sound mix on the stage, the imagery was what we noticed, not the lyrics.

Apparently, we missed Beyoncé’s moment of change. While she has been highlighting women’s rights recently, her new song is about the Black South. And it is causing controversy. Some, including former New York City mayor and Republican Presidential candidate, Rudy Giuliani, say it is anti-police (with references to Black Lives Matter, the Black Panthers and Malcolm X). Her haters have called it ironic since she was escorted and protected by the police at every step of her Super Bowl appearance (click here to view the story in the Washington Post). Others think she is using her platform to bring light to her agenda (you can watch her video as well as read some additional thoughts from NPR by clicking here).

Whether you agree or disagree with her politics, making major changes evokes reactions. This is true for Beyoncé, Rudy Giuliani, and even your nonprofit.

There are times when change is deemed necessary by some and, not surprisingly, your donors, board members, volunteers, constituents, and/or other supporters will not all agree. But, that doesn’t mean you should back down if you believe a shift is necessary. And that is how this superstar is helping offer nonprofit lessons.

Whether you are considering altering the mission of a long-standing organization, “going against” the older generation of supporters to initiate a new capital campaign, or simply revamping the branding and marketing, you will most likely cause some supporters to bristle. And while there is no simple way to alleviate their concerns, there are a few ways to keep the peace.

Catalysts of change, by their nature cause reactions. Your goal, as a representative of a nonprofit, and in life, should be to control the response in such a way that the outcome is positive and the loss of support is minimized. And, to hope that the new direction (building, branding, or mission) brings in additional support. Hopefully, you will feel as Beyoncé does, that the ends justify the means, even if she loses some fans in the process.