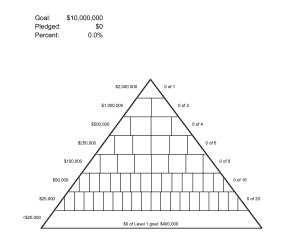 Two weeks ago, David A. Mersky began his new series focusing on the benefits of a capital campaign (above and beyond the financial results). The additional bounty comes about, in part, because a campaign is a marathon – not a sprint. And a lot can happen during an endurance race.

The Phases of a Successful Capital Campaign

But how many solicitations are required to get to 50 + percent of your goal?

I am going to make a few assumptions to move this process along. Assuming that you have determined your needs to be $10 million and you have conducted a study to understand that your community would support a campaign of this size, it’s time to look at your list of prospective donors and create a donor pyramid. Now, let’s say that you are using a standard donor pyramid distribution (google or any number of sites can help you figure this out).

Before I scare you too much, consider that 10 committed fundraising committee members should easily handle 17 prospects over two years. But, they have to be committed to stay the course for the full marathon. A successful capital campaign will not occur by accident or by luck. To continue the metaphor, it is the long distance run that can provide you with a new building or the financial security of a stronger endowment.   And isn’t that worth 17 meetings?

If you would like Mersky, Jaffe & Associates to help you assess your potential for a successful campaign – call us at 800.361.8689