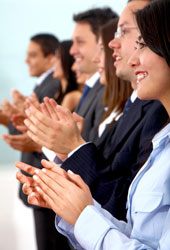 Nonprofits often promote from within which is commendable in many ways.   With hopes that the candidate will grow into the position, weaknesses are overlooked to enable quicker transition time, relationship retention and improved morale.  But when things settle, many of these newly promoted executives have similar shortcomings.

As executive coaches, we know there can be a variety of issues (click here to see a list of some specific areas of focus) but this article will focus on one common hurdle – executive presence.

When it comes to executive presence, perception is reality.  And staff and volunteers will create their perception soon after the transition.  New executives who are aware of this phenomenon often overreact – either suddenly becoming controlling and dominant or nervous and unsure how to react. So how should a person ensure a smooth transition while creating support from staff and volunteer leadership?

Whether you are the new hire or the hiring officer, this outlines some of the potential issues you will encounter and should spark some ideas about areas requiring attention. Perhaps, you can now help ease some of the transition issues that arise when hiring from within.  For additional help, contact David Mersky.