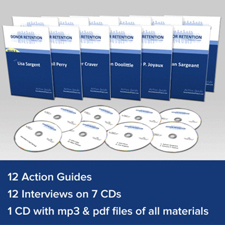 This week, The Donor Retention Project, offered a conversation and action guide with Roger Craver of DonorVoice (as well as serving as the editor of The Agitator). And his research on donor retention strategies is fascinating. Through DonorVoice, he conducted a study of 32 potential drivers that affect donors RFD (recency, frequency and dollar amount) and then proved the 7 factors that predict a positive attitude toward a nonprofit.

The key drivers are not as obvious as I would have thought. This is, in part, because there are nuances that we often lose when creating donor retention strategies for an organization. Consider the following example.

“Timeliness of the organization’s thanking you for your support.” According to the study, how regularly or frequently donors are acknowledged and/or informed about how their donation was used were factors that do not affect attitude; timeliness does.

I know many smaller nonprofits are often happy if they get a thank you note out within a week or two. Just as often, the notes get mailed a month or two later. A month or two later, I barely remember what urged me to give at that point in time. A month delay, as a recipient, means there was a month of tasks that were higher priority than my donation. When I stop to really think about a small nonprofit, I understand the lack of administrative staff or pressing needs often make that true. But most people do not stop to think about it that much. They question whether their small donation is impactful to the organization. And if it’s not making an impact, maybe I should look for somewhere else to give my money! Attitude does change giving –for better or for worse.

Now imagine that I had received a phone call from a staff member within a day or two of the donation and then a note a month later. I would think, they took the time to call me right away! That is appreciation! Then, when the note arrives a month later I will probably see it as administrative bookkeeping (great for my records!).

Yes, making the calls takes staff time, but most of the calls will likely result in leaving voicemails – still achieving high impact. If you are lucky enough to speak with 10 donors each week, you can reduce your new donor acquisition time knowing that you are improving retention ten fold.

I would love to give more details on some of the other key factors like:

but I am out of space. Instead, I would urge you to purchase your own copy of The Donor Retention Project by clicking here. Week by week you will learn how to retain more donors and improve your annual fund in ways that you can only imagine.