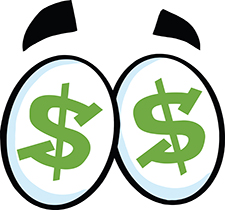 Last month, in this series, I focused on the capital campaign development committee- you can read it by clicking here. This week we will move forward by focusing on who to solicit first. Hold on a sec, I need to turn on my ESP.

Yes, without knowing any of your nonprofit’s specifics, I can tell you who YOU should solicit first.

I suspect that some of you might currently look like a cartoon character with dollar signs in your eyes.  However, with few exceptions, the previously mentioned campaign development committee and the board of trustees should be the first round of donors. It may not be as exciting as talking to your prospects with the largest capacity, but this will provide a better foundation for success.

These are the people who understand and have, in fact, written and approved the case for the campaign.  This group knows that the plan is well thought out and worthy of the community’s investment.  And now, 100% of the committee and board should be the first to put their money where their mouths are.

This is best practice by all accounts.  Even if your committee and board do not yet know it is a best practice, your major donors will. If someone has the capacity to give a $1,000,000 gift, you are likely not the first person to ask them for a large donation.  Over time, they have learned the workings of a well-run campaign.  And having 100% leadership commitment in hand is expected before major donors commit.

It doesn’t matter if leadership provides 5% or 50% of the financial goal, as long as each and every person gives a personally meaningful gift.

By now you might have realized that this requires the campaign development committee to solicit itself.  This should be done with utmost discretion.  Lack of sensitivity around the ability to give can leave bad feelings if handled publicly.  Instead, focus on the gift that feels right for the donor as well as how much closer it brings you to 100% participation  of the leadership community.

If you are still reading this article, you are probably on the development campaign committee, the board or serving as staff.  Be prepared to make your own gift.  Lead by example and you will encourage the rest to follow suit.

Last Month: Capital Campaign Volume 8: Who Will Make The Asks