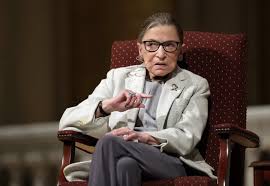 Last week I was lucky enough to witness Justice Ruth Bader Ginsberg have a one-on-one conversation with an old friend, Senior Circuit Judge Bruce M. Selya.  While the hour was filled with her soft-spoken inspiration, there was one moment at the very beginning that was meant to be a fundraising lesson. Ok, maybe it wasn’t explicitly for fundraisers, but I think there were definitely key points to be learned for those who have to ask people to be generous on a regular basis.

Judge Selya is a friend from their time at Harvard Law School and he shared a funny story about an encounter they had a few months after she became an Associate Supreme Court Justice. I am paraphrasing but the story went something like this:

When Ginsberg first became an Associate Supreme Court Justice, the Rabbi of a local congregation (and a good friend of the Judge), asked if the Judge would be willing to speak to Justice Ginsberg on their behalf. The synagogue was hoping she would come visit and share her wisdom. Coincidentally, the Judge was going to be in DC a couple of weeks later and met with Justice Ginsberg in her new chambers. He was building up the confidence to make the request for the congregation when he asked the Justice the largest difference in her life now that she was a member of the supreme court (aside from the actual legal work). She pulled open a drawer and said, “how to handle the 200 invitations to synagogues.”

We all laughed, but there are a few good lessons that can be learned from this telling story.

Want to read other articles on fundraising?

How Nonprofits Create a Connection with Donors

The 3 Cs of Fundraising – Capacity, Commitment and Connection

Meaningful Major Gift: From The Heart And The Wallet