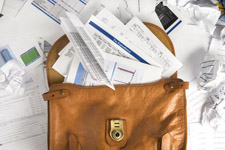 I am not a neat freak. My desk often has a pile of papers and I always have too much crammed into my wallet. I don’t lose things very often, so I don’t usually worry about it. But when it come to nonprofits and their data – it is a different story.

If I lose a receipt to return something, I get a store credit. If I lose track of a donor or prospect, I lose money, credibility and gain bad publicity. That may sound extreme, but we all know that people who have had a bad experience are more likely to share the encounter than someone who got what they expected.

The Pitfalls of Capital Campaign Tracking

It is very hard to track the prospective and current donors during a nonprofit capital, endowment campaign or push to increase your annual campaign.   Some fundraising management software packages make it easier, but only marginally. Consider the number of:

And these are just the considerations that popped into my mind.

This is, no doubt, the least glamorous side of the campaign. But it is also the side that helps you raise more money and gain credibility as trustworthy fundraisers. It only takes one person to be the vigilant keeper of records and coordinate all the data management efforts, but that one person is the essential one to keep your nonprofit’s capital campaign on track.